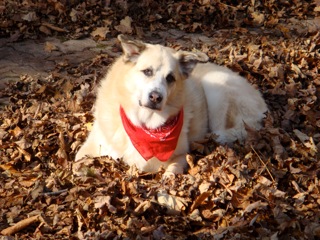 We welcomed Rocky into our lives December of 2001. He was just six weeks old at the time and small enough to fit into a shoebox (we know this from experience). Since then, Rocky has become a beloved family member. One of the activities Rocky likes best is going for walks through Hines or Maybury. He knows a walk is coming when my mom puts her tennis shoes on, my dad gets his windbreaker jacket out, or when someone asks him where his leash is. While my sister, Olivia, and I were visiting our other sister, Hannah, in France over Christmas, we even tried talking to our puppy via Skype by asking him if he wanted to go for a walk. To our amusement, his ears perked up and his head turned into that confused look. It’s a riot when he gets excited because his whole body moves as his huge tail wags back and forth. 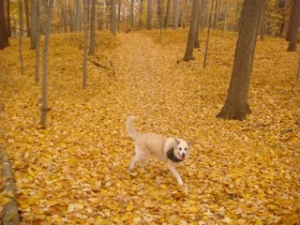 When Rocky sleeps, he tends to snore. At first, we thought it was a passing phase. Now, I think it’s almost like one of those sound machines. We don’t know how we lived without one! I’m not sure everyone would agree — sorry Grandma! Rocky also has various spots where he rests. One of my favorite spots he chose is in the kitchen in the little nook where the stool is supposed to go. When he sits there, it usually means he’s hungry. I figured this out by watching him cram his huge body into the small cave then breathe out a sigh of annoyance. Finally, he starts whining until someone notices. Maybe it’s his dog scale; checking to see if he still fits, then rewards himself with more food if he does. Speaking of food, he has been on a diet of green beans the past couple months because he is a bit overweight. He seems to be enjoying the bland taste. I have even seen more of a jump in his step since he took the challenge. The other day my mom went all out and got him organic green beans! 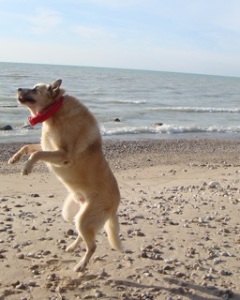 While I was taking a spring course at CMU, my mom, Rocky and I met up in Lansing for a picnic one Saturday. After we ate, we decided to let Rocky go without a leash. It’s impossible to get rid of him because he’s constantly looking back to make sure we are following him. If we’re not, he charges back toward us. So as we walked along the river, Rocky decided that he was thirsty. The water looked quite dirty and we knew what he was about to do, so we shouted to him in protest but he ignored our plea. Unbeknownst to Rocky, the river was deep. As he stepped into what he thought was shallow water, his body kept going forward and he fell in head first. It was pretty funny to watch him in disbelief trying to get out.

We named him Rocky but he has acquired numerous names over the years. David, Puppum, Rockum and Daidy are some of the more popular ones. He answers to them all. I even have a specific whistle to get his attention when he’s distracted.

It has been loads of fun taking care of Rocky. His loving personality and loyal tendencies put a special spot in the heart of those who meet him. He is often waiting on the porch with his red bandana around his neck and a baseball by his side when we come home, always so excited to see us. We feel blessed to have been given such a great dog.